We played what felt like our biggest show yet on Wednesday. It was at White Oak Music Hall and saw us playing with From Beyond, Eagle Claw, and American Sharks. Everyone of them down to earth, nice, and friendly as hell. Everyone played killer sets. Lots of familiar faces in the crowd. It was an awesome night. We’re super grateful to everyone that came out, the other bands, and White Oak for making it happen.

WOMH is fucking NICE btw. The staff are all super cool and gracious. It’s pretty common for sound guys to decide they hate us about halfway through setting up our gear. But not at White Oak. The FOH guy was actually excited to see so much cool stuff on stage and gave us the thumbs up to just do our thing. The drums sounded awesome. Monitors were spot on. Dude is super cool and knows his shit. 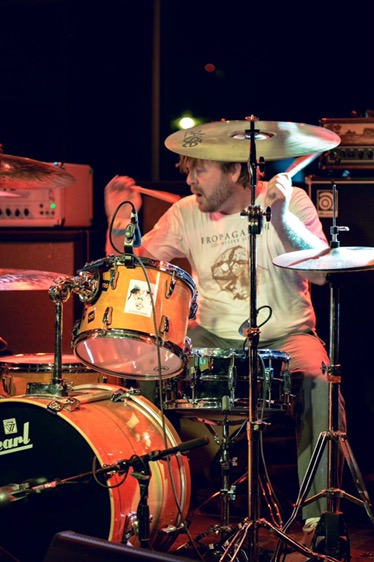 After all that awesome music and a few beers nobody was looking forward to loading out. But then someone mentioned getting some grub at Spanish Flowers. It’s right down the road, open super late, and has some killer food. With the promise of tacos, everyone caught their second wind and we managed to gtfo pretty quickly. So, at 2am on thanksgiving day, the Pyreship family sat down to feast on some life changing Mexican food. All of us grateful to be playing music we love together. Hope you all had a good thanksgiving too.

Oh, if you feel like getting your Black Friday shop on we have things for sale online. Nothing is on sale per se, but for every $100 you spend Sam will adopt another kitten. So make a difference, buy our stuff.

Thanks to https://www.facebook.com/ForseMedia/ for the awesome pics!